Keep up-to-date with Not Quite Mechanised on Wordpress here: https://notquitemechanised.wordpress.com/ 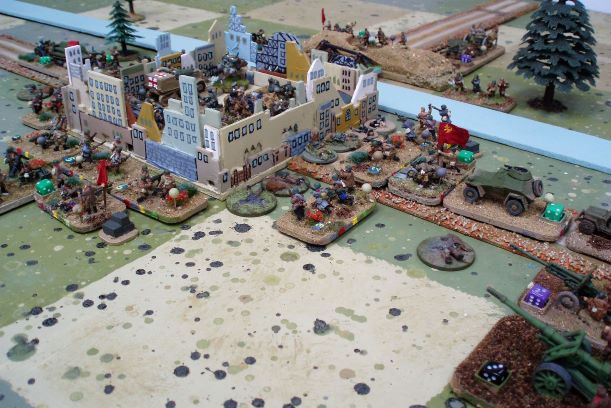 Blogger is an excellent way of posting topical items but has limited ability to make pages, which is why this is just a mirror site for my main blog. I also share the site to Facebook, in case you prefer to access it there. Just search for Not Quite Mechanised. Thank you for visiting my Blog. 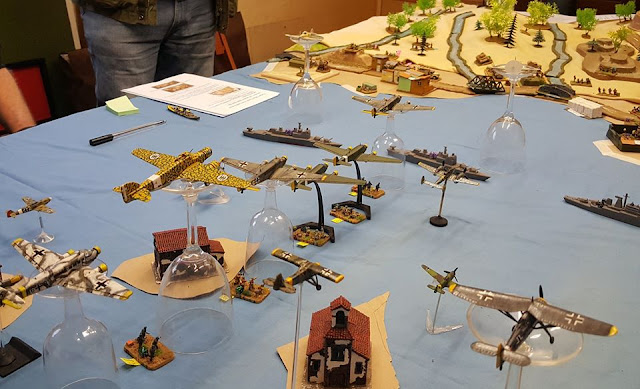 This game was played over an evening from 8 to 11 o'clock including setup and strip down, with Trebian taking the Soviets and Yesthatphil taking the Axis . I scaled the game at one NQM battalion representing a division. This gave me some problems midway through the game, but more of that later.

The 2 Panzer Armee advance was limited to  the rail line from TAMBOV to BORISOGLEBSK due to deteriorating weather. Soviet resistance was less hampered, but 57 Army comprising 99, 150, 317 and 351 Rifle and 14 Guard Rifle divisions  had left most of their their divisional artillery behind in order to advance to contact with  48 MotKorps, comprising 17 and 18 Panzer divisions with 29 Motorised and 167 Infantry divisions.
Soviet South Front had managed to reinforce BORISOGLEBSK with 335 Rifle division from 9 Army in time to fend off assaults from 2nd SS Panzer and then 10 Panzer  divisions from 46 Mot Korps as they arrived on the outskirts of the rail junction.

Things were looking good for 9 Army, as Strategic RKG reserves in the shape of 3 Guards Cavalry and 24 Tank divisions were able to catch 2nd SS Panzer.

I applied a Tank Terror ruling  to the reinforced 10 Panzer and 18 Panzer assault on BORISOGLEBSK. The look of horror in Trebian's eyes told me that I had failed to carry the players with me in the narrative. The story running in his head told him that the heroic 335 Rifle division, fortified* in a city, on the point of achieving guards status , had had victory snatched from them by a dodgy umpire ruling and one die roll. It took a bit of smoothing over as Phil marched the division off into captivity**.

Elsewhere things were going badly for the Germans. An apparently unending wave of attacking infantry was tearing into 48 Mot Korps as it advanced along the rail lines. Any semblance of an attack dissolved as logistic echelons found themselves defending against close assaults.

A fierce cavalry-armour battle developed around the outskirts of BORISOGLEBSK. what became apparent was that the panzers were not going to reach STALINGRAD this year and were not going to hold on to the TAMBOV-BORISOGLEBSK railway.  The assault ended with scattered remnants of  48 Mot Korps straggling in to BORISOGLEBSK in order to fall back to VOROZHNEV to regroup.

* I keep having this problem with the open, single storey, wooden built-up areas in 1940s Russia. Everyone equates them to the high-rise city centre scenes in 'Enemy at the Gates' rather than the more open suburbs of Stalingrad that burned down leaving only chimmney stacks. I count these troops as Medium in defence, and only count  fortified troops in concrete bunkers as Heavy.

** On reflection, a rule that works well at battalion level is too abrupt to apply to an entire infantry division, even if it has left its heavier equipment behind  to reach close terrain. On reflection, I should have made the panzers fight through the rail junction. The result would probably have been the same, looking at the red pips on the infantry stands, but the players would have been happier, and that's important.

In the dying days of Summer 1942. German armoured forces fanned southeast to STALINGRAD towards the banks of the river VOLGA. Spearheading the 2 Panzer Armee advance against minimal opposition were 10 Panzer and  2nd SS Panzer divisions from 46 Mot Korps less Gross Deutchland, which had been engaged at TAMBOV junction.

48 MotKorps, comprising 17 and 18 Panzer divisions with 29 Motorised and 167 Infantry divisions, were echeloned northwards behind them. These formations were all well understrength and although coming to the end of their logistical chains, were benefitting from the opening of TAMBOV junction to rail traffic.

The M3 Honey conversion has had the last few splashes of paint aimed at it. My photography skills do no favours to the details: Brigade flashes, Recognition flashes, graphite and rust on the tracks etc. In the end, the mantle was carved from the cork at the front of the turret. Here it is.

Photo copyright Phil Steele. Old Glory M3 with the PSC conversion
After letting the paint dry on my M3 and staring at it on the workbench, I came to the conclusion that the turret was too big, wide and just generally fat. Finding an old 20mm turret confirmed that it was also too chubby at the front. The deal breaker for me was that the turret angles were not sharp enough making "the look" unconvincing. I trimmed it and although it is still too long in the front (The commander's hatch should cover the roof when open, just about), it looks about right now. I could have just measured it, but hey?
After trimming  the turret, the model was airlifted  round to Trebian's Shedquarters, as  he has one tricked out for Burma (Skinner's Horse?). Cripes, I thought, the whole thing is massive compared to the Old Glory offering! A quick impromptu meet of the Greek Philosopher's scale debating club convened over tea and cake after the game, before Phil and I separately went off to count the camel's teeth!

It turns out that the PSC is accurate, and that by skill or luck, my M3 is bang on the nail for height and width, but short at the back. The OG model is undernourished, although it looks fine on it's own. I love 1:100 as a scale. Even I can do the sums!
A quick paint to get it "table ready", then it's into the box to await a game or bulk weathering session. As ever, I fudged the Caunter scheme - My M3 doesn't have sand sheilds, so I went with Tamiya Mid Blue on the turret roof, Olive Drab lightened and desaturated with Light Blue, and Desert yellow, all over a khaki undercoat. It's not as garish as my first attempt with the Massive Moritz.
Posted by Chris Kemp at 16:26 No comments:

Phil Steele coined the "Pointless Conversion" phrase during one of his exemplary builds of an SU-122, observing that sometimes an apparently pointless project made sense. This conversion is one such as I already own a couple of perfectly servicable metal M3s with the later round cast turret. Phil brought a box of PSC M5s back with him from a show at my request. At the time of purchasing, I thought the spare hulls  would do nicely for the Western Desert and for Eastern Front Lend-lease. I knew that M3s were used, but didn't realise that M5s were not, or that more importantly all three hull variations in the PSC kit were M5s. Bobbins!

Undaunted, I set about a pointless conversion. First of all the rear deck was cut off and reversed. Saw away the fuel tanks and save them, they will be needed later. I used a block of wood as the lower hull with the upper hull shimmed to get it level, and the tracks glued straight to the block.

Next, the front glacis plate was chopped away. Card (plasti- or paper) was used to deck in the holes, and was trimmed level once it had set. I do most of this with scissors and a fresh sharp scalpel, obviating the need for much filler, although when this technique goes wrong, the bodges are more obvious.

The hull was reasonably straightforward to build up and a spare PSC T-34 fuel tank made the vertical exhaust chambers. The suitably chopped fuel tanks went back on in a reversed position, although looking at some of the desert pictures, square stowage boxes occupied these spots.

A cork core sheathed in card formed the frame for the turret. I ran the angles by eye, filing and slicing away until it 'looked about right' although it is probably a tad over scale. The PSC commander in beret deflected attention away from any deficiencies in this area. Wire from the bits bin made a gun and some Milliput will provide a mantlet.

The conversion appears slightly too short in the hull, but I wanted it to fit in with my existing two metal M3s. Job done. I suppose I should paint it now instead of sending it Soviet-style into its first game wearing nothing but an undercoat. Mantlet, paint and more faffing about to follow ...

http://notquitemechanised.wordpress.com/2012/10/01/gazala-tank-strengths-cross-referenced/
Posted by Chris Kemp at 18:51 No comments:

When a motorised battalion of infantry with integral transport goes into battle, one of the bases (usually a Support (S) base)  can be an integral part of the transport base. In addition, the transport may carry other bases (usually  Fighting (F) bases) that ‘deploy’ when the stand attacks or defends.  The following scale should provide a rough guide but is not prescriptive :

If there are a mix of fighting and support bases in the stand, it can be given a hybrid designation, such as  FS, CF, CS, or even CFS.
This is different to the case of a marching infantry unit that happens to be transported in trucks that are not a normal part of their orbat. For marching infantry, the truck(s) can be accounted for separately as a Logistic (L) stand.
In retreat, all your troops will fit onto the trucks up to a maximum of double the usual extra stands, but no support weapons, so support stands become rifle stands.

So a panzer grenadier battalion has 3 halftracks (each CS3 or FS3 light armour with an integral machine gun  or PaK 37). The 250 will always have an integral command base or may have an integral command/support base (MG or Pak), and probably also has a dismountable support base with it in the shape of a mortar. Each 251 has an integral support or gun base. Regimental gun support can be simulated by modelling the gun on the transport e.g. the Sd Kfz 250/10 or  Sd Kfz 251/10, or as a towed gun, as shown in the picture above.

In total up to 6  dismountable rifle or support bases could be carried by the 3 battalion transports with their integral non-dismountable bases. You could use as few as 3 or 4 dismountable bases to reflect the often-reduced fighting strength of these heavily used units.

Mot Rifle Bn  Comd Car + 81 or 50mm Mor (CS3),  1-2 [Trucks or 1/2 tracks with integral mg support stand + 1-2 Rifle bases (FS2-3),  (Rifle stands may have integral AT Rifle or Pzfaust  capability). A total of 6-9 bases per battalion including the vehicle bases, in line with infantry battalions is about right, making a total of 3 stands, as shown below.

In total up to 6  dismountable rifle or support stands can be carried by the 3 battalion transports with their integral non-dismountable stands. Any regimental guns will be towed in this orbat. If a truck does not have an integral support or fighting base, count it as (L1)

Please note that this does not in any way seek to replicate the actual carrying capacity of these vehicles; rather it simulates the functions of a battalion, whilst still allowing a modeller to produce signature equipment in his orbat. The orbat also gives flexibility without being too prescriptive. If you disagree, run your ideas past your opponent and reach an agreement for an enjoyable game.
Posted by Chris Kemp at 23:05 No comments: